According to the Wayne Gretzky Biography, young Wayne would spend a lot of time on his home rink, now named "Wally's Coliseum." Most acknowledge that he acquired his skill and instinct of the game by playing on his backyard rink.

Soon after, his dad, Walter Gretzky, decided to make a backyard skating rink for him in order to have fun and practice his skating techniques. Wayne soon developed and mastered his unique skating stride.

During those early years, Gretzky developed his passion for playing hockey and for skating outdoors. It is also said that watching Hockey Night In Canada inspired this young, talented boy to play hockey ... and this future hockey phenomenon surely had in him some excellent hockey to play!

His dad's name is Walter Gretzky and his mom's name is Phyllis Gretzky.

The Gretzky family was very close.

Wayne was the first child, the older brother to Kim, Keith, Glen and Brent Gretzky.

According to the Wayne Gretzky Biography, young Wayne would spend a lot of time on his home rink, now named "Wally's Coliseum." Most acknowledge that he acquired his skill and instinct of the game by playing on his backyard rink.

At the age of 6, in 1967, young Wayne would spend a lot of time on his home rink, now named "Wally's Coliseum." Most acknowledge that he acquired his skill and instinct of the game by playing on his backyard rink.

At the age of 10, in 1971, and in his 5th season of hockey, Wayne finished the winter hockey season year by tallying an unbelievable number of goals ... 378 goals to be exact. I don't know the number of assists, but I understand he played 68 games that season.

At 16 years of age, he played hockey for a midget league and was drafted by Sault Ste. Marie Greyhounds. That same hockey season he was awarded the OHL rookie of the year. If you come across the Wayne Gretzky rookie card, you will be amazed to observe how young Gretzky really was when he was awarded this title.

At 17 years of age, on June 13, 1978, Wayne signed a contract to play pro for the Indianapolis Racers of the World Hockey Association (WHA). However, 12 games into the season he was traded to the Edmonton Oilers.

I have compiled a list of Wayne Gretzky Stats from his junior hockey years, his 20 year NHL career, and his International hockey career.

He is still the hockey records holder for the professional hockey player having scored the most regular season goals. He currently possesses more than 60 NHL records.

His vision of the game made him a unique and unparalleled special hockey player. His reaction time was split second and his stick handling astonishing. His lightning skating and puck handling skills won raves from fans, players and coaches. Many hockey spectators consider him to be the NHL's best playmaker ever.

"Gretzky sees a picture out there that no one else sees" coaches would say.

He definitely had a superior understanding of the game of hockey and that is why in the hockey world, the term The Great One, is reserved for none other than Wayne Gretzky.

The most popular Wayne Gretzky quote:

I skate to where the puck is going to be, not to where it has been.

Some other famous Wayne Gretzky Quotes... 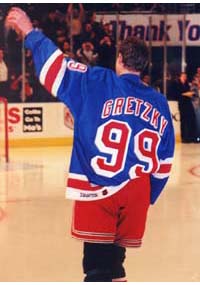 This RSS feed is a small blog about backyard rinks (kind of an online journal), which will also let you know whenever any new or changed Web pages appear on mybackyardicerink.com.

mybackyardicerink.com Blog News keeps you up-to-date with other special postings and points out some of our special past topics that you might otherwise miss.

What is an RSS feed?

Three other ways to keep in touch!

If you like my Site about Backyard Ice Rinks, please let Google know by clicking the +1 button.

On all pages except the Home page, you will also see Page +1 buttons. Please click the buttons of pages that you like.

Note: If a +1 button is dark blue, you have already +1'd it. Thank you for your support!

(If you are not logged into your Google account (ex., gMail, Docs), a login window opens when you click on +1. Logging in registers your "vote" with Google. Thank you!)

Note: Not all browsers show the +1 button.